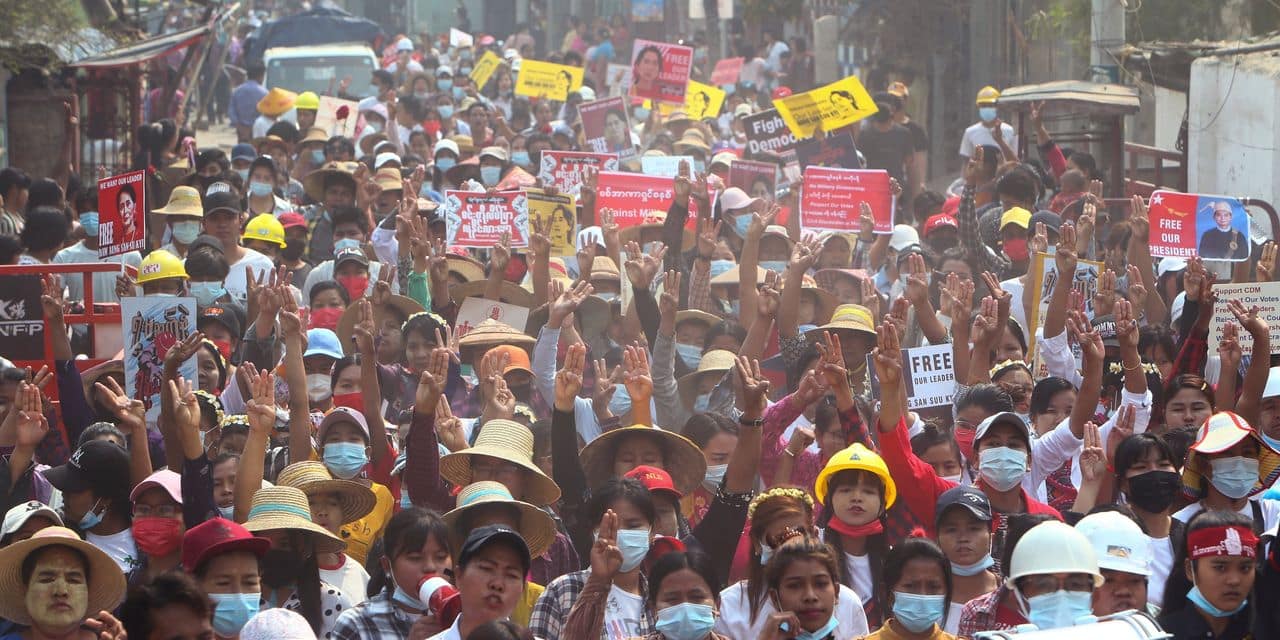 Government officials, farmers and private sector workers participated alongside youth and activists in rallies across the country.

In Myitkyina (center), the situation quickly escalated. Multiple detonations were heard and demonstrators covered in blood were transported away from the shooting zone, one of them lying face down on the ground, part of his skull torn off, according to broadcasts broadcast live on the networks. social.

Assessment, two dead and several injured, including a woman seriously injured in the arm, according to a rescuer.

In Pyapon, a hundred kilometers south of Rangoon, the economic capital, a 30-year-old man was shot dead in the stomach, we learned from a witness who attended the scene.

Two other protesters were injured by live ammunition, he said.

“We are the first newsroom attacked by the regime. We work in fear, but the raid on our office confirms that the junta will have no tolerance for reporting on its crimes,” he said.

In Rangoon, textile factories, a booming sector before the February 1 coup, and shopping centers remained closed, like banks across the country.

Nine of the largest unions have called for a “complete and prolonged shutdown of the economy” from Monday to put pressure on the military.

The junta, for its part, warned officials: those who did not return to work from Monday will be sacked.

Calls to strike, launched in the first hours after the putsch, have already had a significant impact on many sectors, with banks unable to function, hospitals closed and ministerial offices empty.

Security forces were deployed Sunday evening in several neighborhoods in Yangon and took over several public hospitals in Yangon.

The NGO Physicians for Human Rights condemned the occupation of hospitals, saying it was “appalled by this latest wave of violence”.

MPs who do not recognize the legitimacy of the coup and have created a committee to represent the civilian government are guilty of “high treason”, a crime punishable by death or 22 years in prison, the police warned. junta.

More than 50 protesters have been killed since the putsch that overthrew the 1991 Nobel Peace Prize.

State media deny any police and military involvement in the deaths of civilians, saying they “must have contained riots by law”.

Local officials, journalists, activists, artists: hundreds of people have been arrested since the putsch.

Faced with the deterioration of the situation, the Burmese are fleeing.

About fifty, including eight police officers who refused to take part in the repression, reached neighboring India, on the border of which dozens of others gathered.

The UN Security Council failed on Friday to agree on a joint statement and negotiations are due to continue this week.

The junta, which contests the legislative elections of November won overwhelmingly by the NLD, has promised to hold a new ballot, without revealing any timetable.