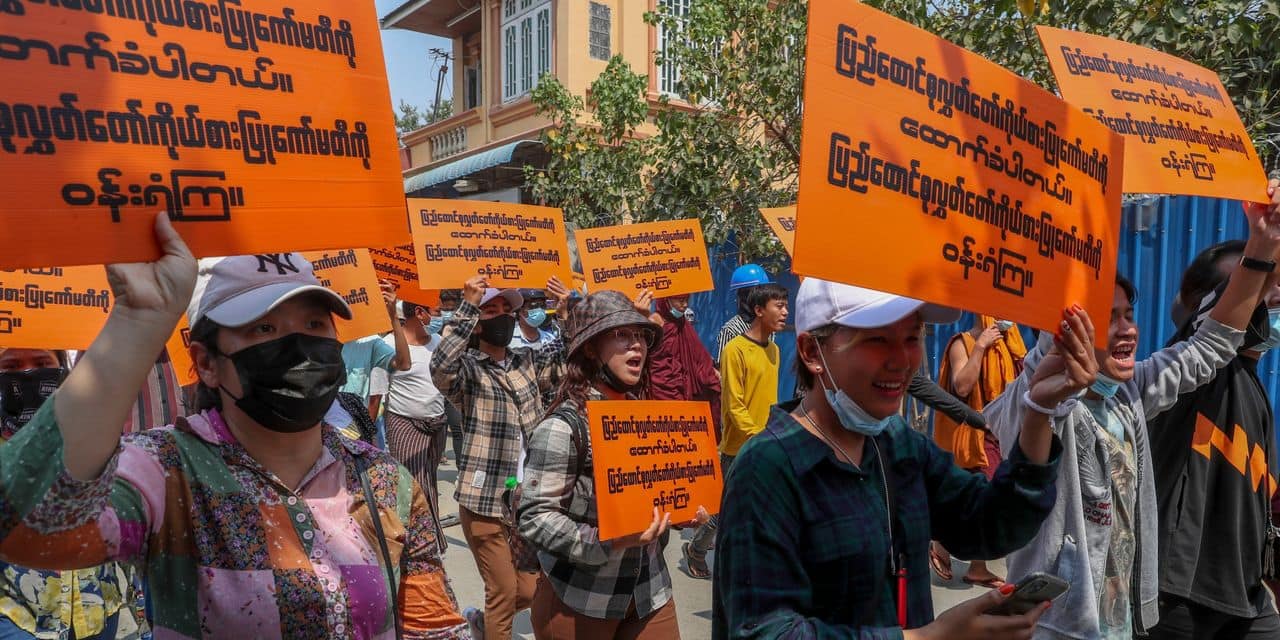 The toll could be much heavier: hundreds of people arrested in recent weeks are missing.

Despite this, the mobilization continues.

“The pro-democracy movement keeps the junta unable to exercise political and administrative power,” notes the Association for Assistance to Political Prisoners (AAPP).

New gatherings were organized on Saturday as in Mandalay (center). Gathered behind barricades of sandbags, the protesters held up a black banner, signed: “the fighting peacock”, a symbol used during the popular uprising of 1988, then by the party of Aung San Suu Kyi, the National League for democracy (LND).

170 kilometers away, in the city of Kyaukme, demonstrators took up positions behind shields decorated with the three-fingered salute, in a gesture of resistance.

“Who said we have to give up because of (the junta’s) weapons? We were born for victory,” tweeted Ei Thinzar Maung, one of the protest leaders.

“We will fight to the end,” wrote another protester. “We will bring down this dictatorship.”

But the crowds are smaller, many Burmese remain holed up at home for fear of reprisals.

One person was killed during the night by security forces in the mining town of Mogok (north) and two seriously injured, we learned from a rescuer.

In Yangon, the situation remains very tense and the two million inhabitants of the economic capital are subject to martial law.

Some neighborhoods have descended into chaos, with protesters hurling projectiles and Molotov cocktails at the army and police, who fire live ammunition.

“The shootings are increasing day by day,” laments the AAPP. Soldiers and police “loot and destroy public and private property on a daily basis.”

When asked, the army did not respond to AFP’s requests.

Many residents have left the city in recent days, piling their belongings in the backs of cars, tuk-tuks or two-wheelers to return to their home region.

More Burmese have fled to India and Thailand is preparing to welcome an influx of refugees.

Burma is closing in more every day. Mobile internet connections remain cut and only state newspapers are available.

Arrests continue, especially among strikers, members of the NLD and journalists.

A Burmese correspondent for the local BBC service, Aung Thura, was arrested on Friday by unidentified men.

More than 30 journalists have been arrested since the putsch, including a photographer from the American news agency Associated Press.

“The killing of peaceful protesters and the arbitrary arrests, including of journalists, are completely unacceptable,” UN Secretary General Antonio Guterres tweeted on Saturday. “A firm and unified international response is urgently needed.”

But the generals continue to turn a deaf ear to the many international condemnations.

The European Union is due to sanction on Monday eleven Burmese officers involved in the crackdown, according to diplomatic sources.

Brussels is also finalizing coercive measures aimed at the economic interests of the members of the junta.

Countries of ASEAN (Association of Southeast Asian Nations) – which usually has as a rule not to interfere in the affairs of a member state – are also raising their voices.

Indonesian President Joko Widodo will ask the Sultanate of Brunei, which chairs ASEAN this year, to organize an emergency meeting.

“Indonesia urges that the use of violence cease (…) The security and prosperity of the population must become the top priority,” he said.

Malaysia and the Asean community as a whole cannot afford to see “our brother nation become so destabilized at the hands of a few people, who seek to promote their own interests,” commented Malaysian Prime Minister Muhyiddin Yassin.

Aung San Suu Kyi, 75, has been held in solitary confinement by the military for 48 days.

She faces corruption charges and is charged with several other offenses. If found guilty, she could be sentenced to long years in prison and be banned from politics.