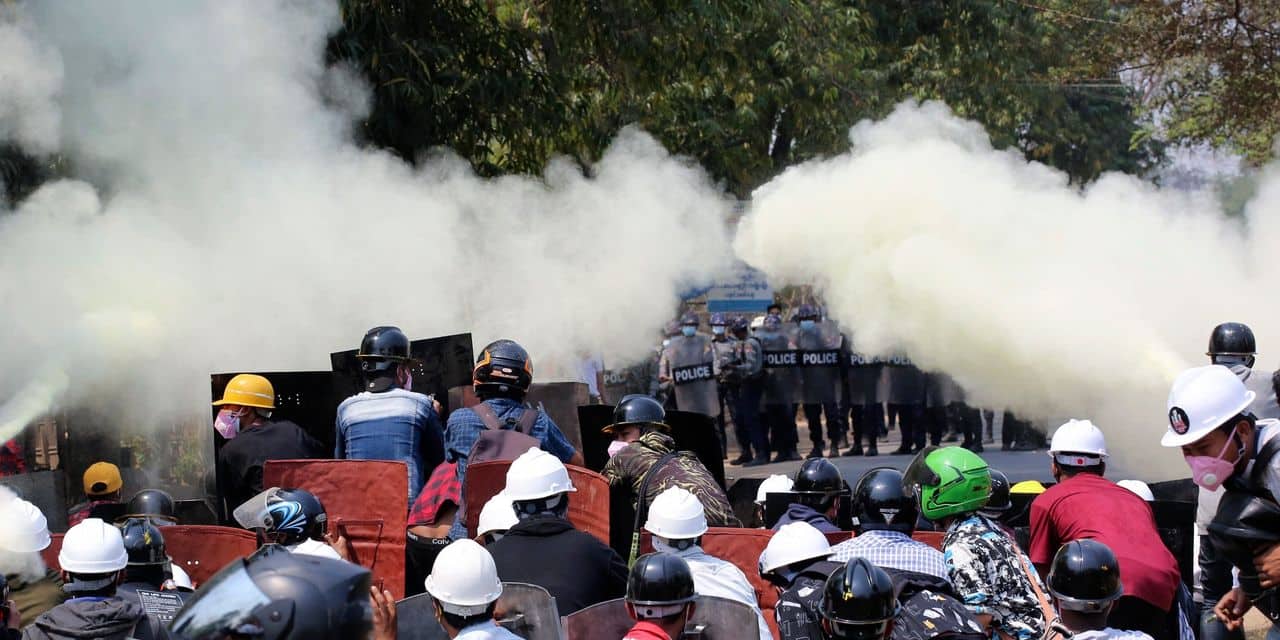 Axes of the economic capital are blocked by the military and traders hurry to sell their goods before possible new violence, noted AFP journalists.

On the night of Monday to Tuesday, hundreds of protesters, including many Burmese who came to celebrate International Women’s Day, were cornered for hours in the Sanchaung district, the scene of multiple anti-junta rallies in recent days.

Anyone caught hiding protesters will be punished, state media warned.

“The police inspected all the houses on the street. They came to our apartment, but we hadn’t hid anyone,” and they left, said a resident. “They told us not to look at them, otherwise they would shoot,” said another.

Several dozen people have been arrested, according to testimonies collected by AFP.

To support the besieged protesters, hundreds of residents defied the curfew imposed by the authorities by taking to the streets. “Free the students,” they chanted, as security forces fired, including stun grenades, in an attempt to disperse them.

The protesters were able to leave the neighborhood in the early hours of the day.

The events of Sanchaung led to a new set of international protests.

The Secretary General of the United Nations, Antonio Guterres, urged “maximum restraint” and “the release” of the demonstrators “without violence or arrests”. The European Union’s representation in Burma, the embassies of the United States and the United Kingdom, the former colonial power, have issued similar messages.

The junta is continuing its repression more than ever in an attempt to put an end to the peaceful insurgency against the coup that overthrew Aung San Suu Kyi on February 1.

Three protesters were killed on Monday and several injured.

In Myitkyina (north), images broadcast on social networks showed protesters inanimate and covered in blood, one of them lying face down on the ground, part of his skull torn off. A Catholic nun in a white dress knelt in the street, begging the police not to shoot.

In Mandalay (center), two military vehicles collided with protesters, six were injured, two of them seriously.

The army plunges the country more every day “in a climate of fear”, deplores the Association of Assistance to Political Prisoners (AAPP) which lists at least 60 civilians killed since the putsch and more than 1,800 arrested.

A police operation took place on Monday against the Myanmar Now news agency.

“We are the first newsroom attacked by the regime. We work in fear (…) the junta will have no tolerance for reporting on its crimes,” noted its editor Swe Win.

The license to publish this media was then revoked by order of the Ministry of Information, which did the same for other independent media outlets (Mizzima, DVB, Khit Thit and 7 Day).

The National League for Democracy, Aung San Suu Kyi’s party, is also particularly targeted with many officials arrested in recent days and a local representative killed.

The military confirmed having taken control of public hospitals and university campuses “at the request of citizens who do not want to see instability in their country”.

Doctors, teachers, lawyers and other officials have gone on strike since the coup.

The unions called for stepping up the movement from March 8 to cripple the economy and put pressure on the junta.

These calls for civil disobedience are having a significant impact on many sectors of Myanmar’s fragile economy with empty ministerial offices, closed schools and hospitals, and unable to function banks.

The junta for its part warned officials: those who will not have returned to work from March 8 will be sacked.

Britain, the United States and some other Western countries have imposed targeted sanctions. But China and Russia, traditional allies of the Burmese army, do not formally condemn the coup.

Suddenly, the UN Security Council failed to agree on a joint declaration. Negotiations are to continue this week.