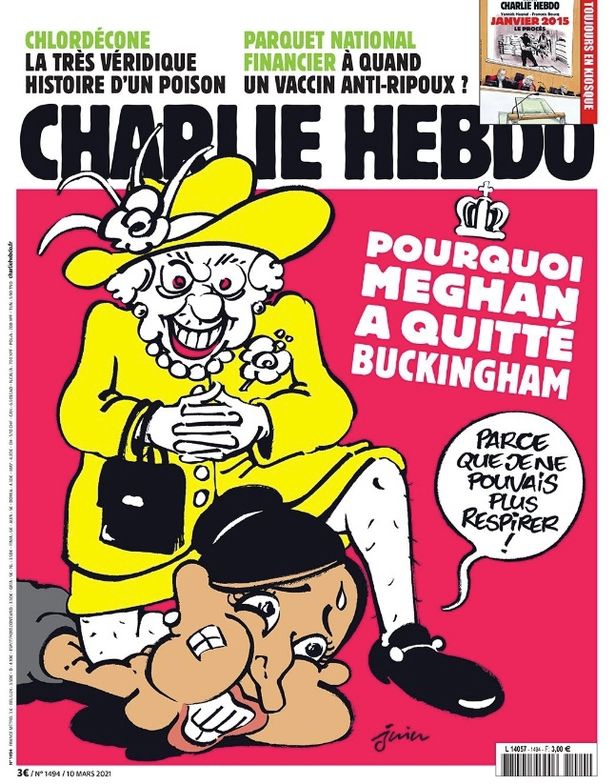 The French satirical magazine Charlie Hebdo is under fire in the UK. The occasion is a cartoon about Meghan Markle and the Queen.

The cartoon in question graces the cover of Charlie Hebdo’s latest issue. Entitled ‘Why Meghan Left Buckingham’, a grinning Queen Elizabeth can be seen planting her knee in Meghan Markle’s neck. “Because I couldn’t breathe anymore,” Markle replies.

It is a clear reference to the last words of George Floyd, the man who died last year when a police officer held his knee on the black American’s neck for nine minutes during his arrest in Minneapolis. That case sparked the worldwide ‘Black Lives Matter’ protests.

There is an indignant reaction to the cartoon across the Channel. “This is wrong in any way,” Halima Begum, CEO of the anti-racism think tank Runnymede Trust, wrote on Twitter. ‘This doesn’t challenge, doesn’t make anyone laugh, or makes people think about racism. It minimizes those issues and offends. ‘

“A weak and poorly thought out answer from Charlie Hebdo that only makes things worse,” says the Windrush Anchor non-profit organization. This kind of simplistic satire has no place in the fight against racism. Downright awful and sad. ‘

The cartoon follows Meghan Markle and Prince Harry’s controversial interview about their move to the US. In it, they accused Buckingham Palace of racism. Prince William defended the royal family last week. He said his family is not racist at all. Queen Elizabeth takes Meghan and Harry’s allegations of racism “very seriously,” but “memories may be different.”