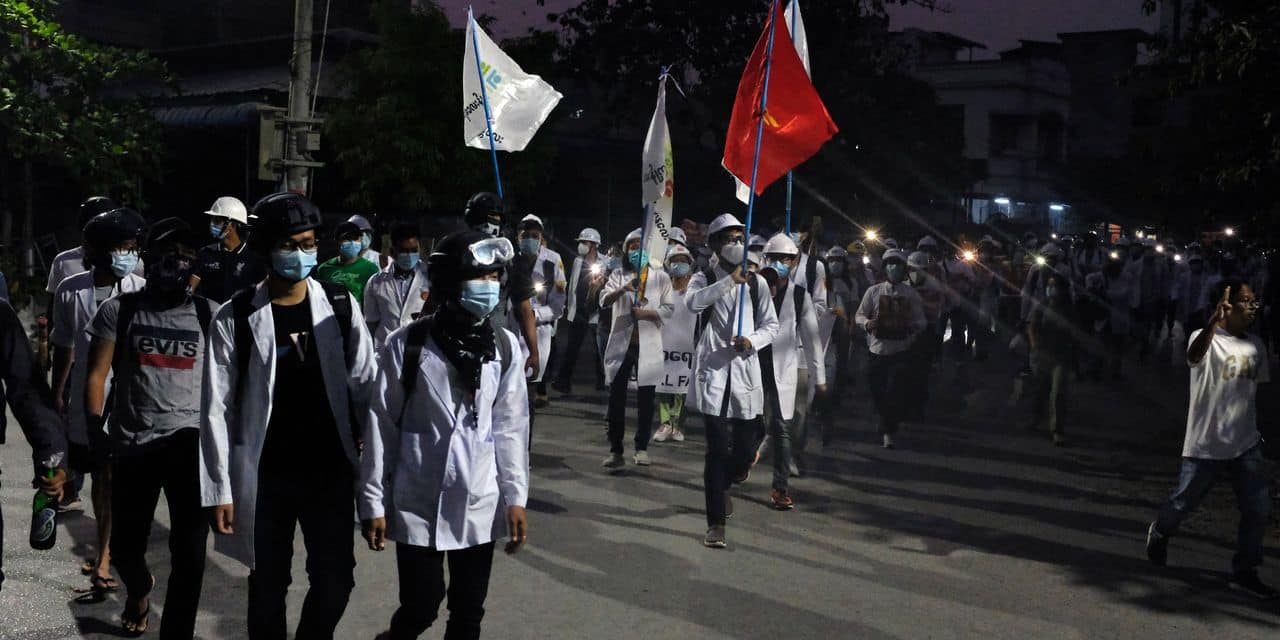 “Save our leader” Aung Sang Suu Kyi held in secret by the army for 49 days, “Save our future”, could we read on the banners of the protesters gathered Sunday before dawn in Mandalay (center).

Other rallies were organized in the far north and center of the country at night to try to foil the bloody response of the security forces, the protesters having lit hundreds of candles to implore the UN to intervene.

Doctors, teachers, bank and railway employees have been on strike for six weeks to denounce the military regime. They paralyze entire sectors of the economy, already very fragile before the putsch.

In the streets, demonstrators have been fewer in recent times, with many Burmese staying in their homes for fear of reprisals.

The human toll continues to increase. A man was killed and at least two others injured Sunday morning in Monywa (center) when security forces opened fire on a small group positioned near a barricade, witnesses told AFP.

Policemen and soldiers “threw stun grenades and used tear gas, then they started shooting,” said one of them.

“Not afraid of blood”

“We will fight to the end,” commented protesters on social media. “We are not afraid of the blood” that the army spills.

Nearly 250 civilians have been killed since the coup, according to the Association for Assistance to Political Prisoners (AAPP), while hundreds of people arrested in recent weeks are missing.

“The population lives in fear, people are intimidated (and) treated like combatants” in times of war, deplores this NGO.

In Yangon, the economic capital, the situation remains very tense since two of its five million inhabitants are subject to martial law.

Some neighborhoods have descended into chaos in recent days, with protesters throwing projectiles and Molotov cocktails at security forces, who fire live ammunition.

The shootings escalated further on Saturday, with at least two dead and three injured in the city, according to the AAPP.

Faced with this violence, the population continues to flee.

The platforms of the bus station were crowded on Sunday with packages and suitcases of all kinds. “I cannot remain living in fear. I have no more work, I am going home,” said a young Burmese.

Others try to leave their country. Thailand expects an influx of refugees and India has already received several hundred.

The Burmese bury their dead every day.

The funeral for a mother of three, Mar La Win, is due to be held this Sunday in a central town.

“She had just come out of our house. I heard shots and she fell,” her husband Myint Swe, who managed to hide, told AFP. “When I went to collect her body from the morgue, it was covered with wounds, I don’t know if they tortured her.”

When asked, the army did not respond to AFP’s requests.

Burma is closing in more every day. Mobile internet connections remain cut as well as several wifi networks and only State newspapers are available.

The repression also continues in the judicial field with more than 2,300 people arrested.

A couple of Australian consultants were under house arrest as they tried to catch a plane to leave the country, diplomatic sources have learned.

Three men from Yangon’s Hlaing Tharyar suburb, the scene of a massacre last week with dozens of protesters killed, have been sentenced by a military court to three years in prison, plus hard labor, media say of state.

Officials from the National League for Democracy (LND), Aung San Suu Kyi’s party, are charged with “high treason”, a crime punishable by 22 years in prison.

The 75-year-old former leader, meanwhile, faces corruption charges and is charged with several other offenses. If found guilty, she could be sentenced to long years in prison and banished from politics.

The European Union must therefore sanction 11 officers involved in the repression on Monday.