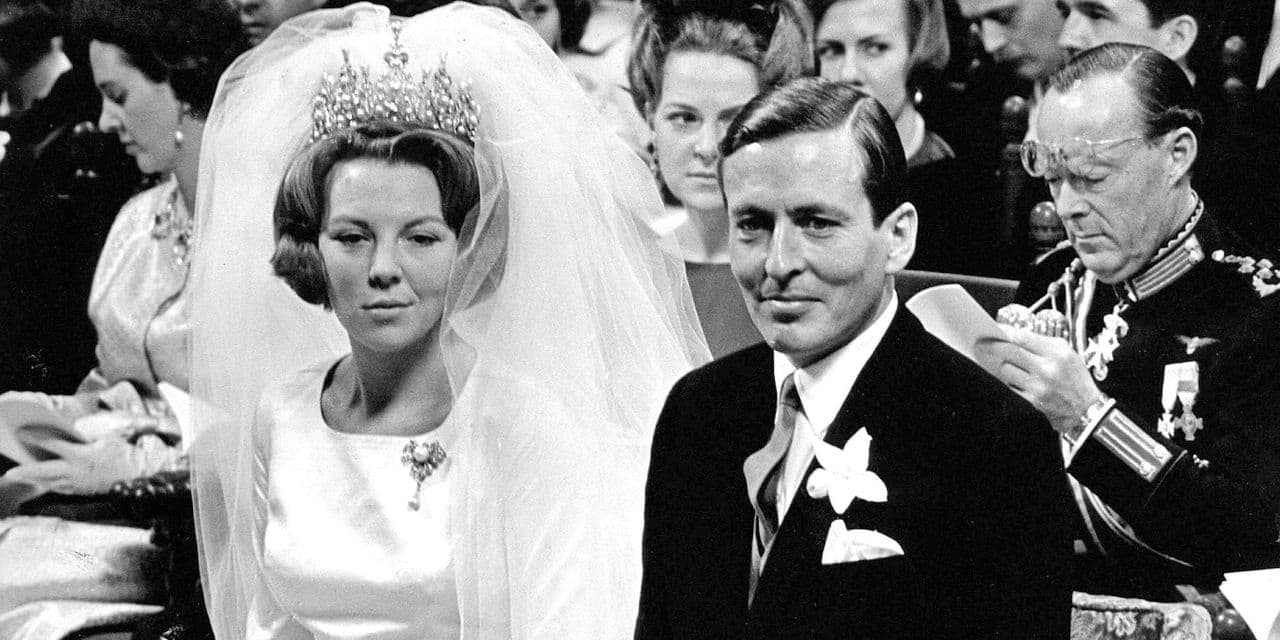 Beatrix from the Netherlands should have celebrated her orchid wedding anniversary on March 10, namely 55 years of marriage, if life had not already taken her husband Claus von Amsberg from her in 2002. A beautiful love story for which the future queen had to fight to impose her choice to marry a German in a post World War II period still very sensitive in the Netherlands.

It was during a New Year’s Eve party in Germany in 1962 that Crown Princess Beatrix of the Netherlands, born in 1938, met a German diplomat from the gentry, Claus van Amsberg, born in 1926. They see each other on several occasions. In their circle of friends is also Prince Richard of Sayn-Wittgenstein-Berleburg (who later married Princess Benedikte of Denmark), so much so that one begins to believe in a romance between them.

In May 1965, stolen photos show Beatrix and Claus in the grounds of Drakensteyn Castle, the princess’s residence. When we discover that Claus was a member of the Hitler Youth, it is a stir in the Netherlands.

Claus von Amberg lived as a child in Tanzania and kept a privileged relationship with the African continent. In 1938, he returned to Germany and was forced to join the Hitler youth, then the army, like young people of his age. Taken prisoner by American troops in Italy, he serves as their driver and translator.

Back in Germany and graduated in law, he worked on the rehabilitation of the rights of German Jews before entering a diplomatic career in the Dominican Republic and then in Côte d’Ivoire.

It will take an investigation demonstrating that he did not commit a war crime for the Dutch Parliament to approve the marriage.

This March 10, 1966, Beatrix shines and is very happy. Never mind the smoke launched all along the route in the streets of Amsterdam. Wearing an imposing pearl and diamond tiara, the princess wears a creation by Lien Bergé-Farwick from the Linette fashion house in Den Bosch. Among the guests of Gotha, Belgium is represented by King Baudouin, Queen Fabiola, Prince Albert and Princess Paola.

Prince Claus’s endearing personality soon won over his new compatriots. Beatrix became queen in 1980, a period from which she sank into successive depressions. Overwhelmed by the weight of the royal office and unable to flourish in the field of cooperation and development as he dreamed of, he spent several stays in hospital.

During all these years, he can count on the real affection of his wife and his sons. In 2001, when his eldest son Willem Alexander introduced his controversial fiancée Maxima Zorreguieta, daughter of a minister in the dictatorial Argentine government of Videla, the prince was there to say a few words and ask the public to immediately open his arms to Maxima, as she quickly did for him. The prince who overcame cancer but who is diminished and suffers from Parkinson’s, moves with his affectionate words.

Very fragile, he only attended the religious wedding ceremony of Willem-Alexander and Maxima on February 2, 2002. In June 2002, he became a grandfather for the first time with Countess Eloise.

On October 6, 2002, he died in Amsterdam. His disappearance is felt with great sorrow in the country. As a woman of character, Beatrix would reign alone for another 10 years.

During her televised message to the nation in April 2013, the day before her abdication, Beatrix had words for her late husband, concluding that it had been the best decision of her life to marry him.

Today, a grandmother of eight grandchildren including a single boy named Claus-Casimir, she returned to live in Drakensteyn Castle where her love affair with Claus had started.