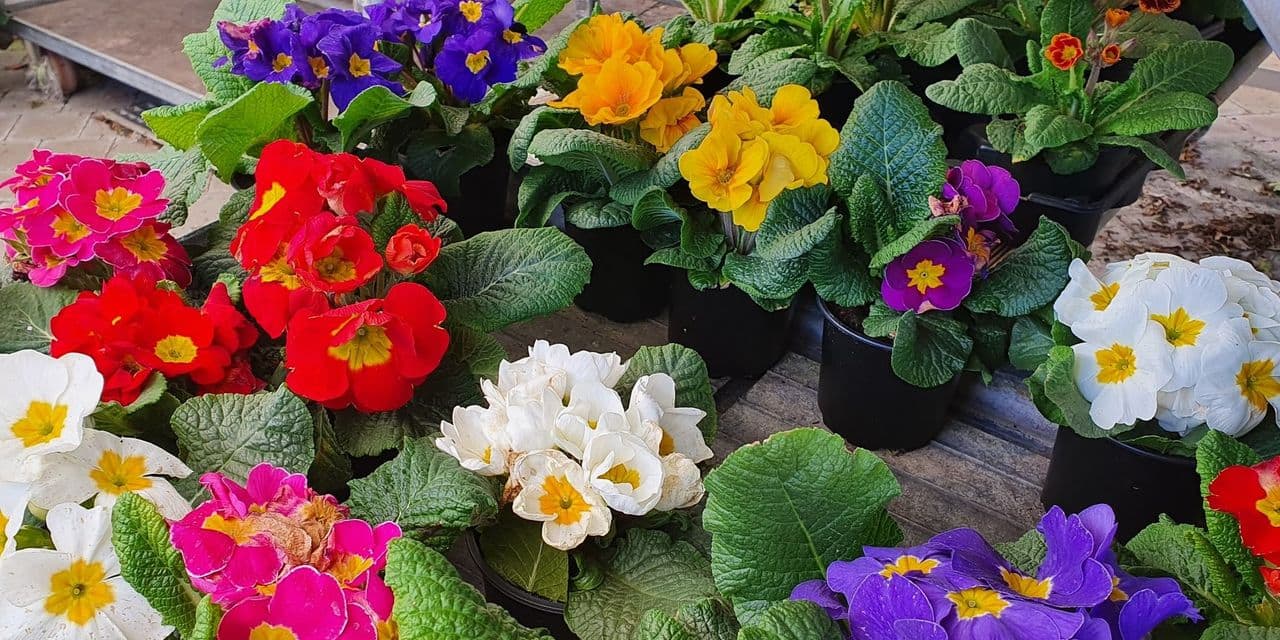 Primroses fight against winter sadness and announce the arrival of sunny days. Their huge and colorful flowers as a result of numerous hybridizations leave no one indifferent. Typical of traditional country gardens, we like or hate their old-fashioned charm. Grumpy spirits reproach them for being not very rustic and difficult to keep from year to year. They do not appreciate their coloring which degenerates with age. But even if refinement is not its first quality, it must be recognized that this colorful tribe, continuously improved by specialists, has brightened up gardens and terraces for generations with ease. However, there are many more.

From the large Primulaceae family, about 500 species of primroses live mainly in the temperate northern hemisphere. Perennial plants recognizable by their leaves in basal rosettes, their solitary flowers or in umbels, they start the first spring, prima vera in Italian. Some are indigenous.

Primula vulgaris or acaulis, ultra-compact. From the month of March, it illuminates and perfumes the undergrowth, embankments, ditches and damp places with its small solitary light yellow flowers, smeared with orange in the center. At the level of the daisies, hairy, emerging from a rosette of embossed leaves characteristic of this species, they appear above a central mini-stem of 1 or 2 cm high, which is worth to him the botanical adjective of acaulus, without visible stem. Grown in gardens in white or pink versions, Primula vulgaris mixes with others and naturalizes.

Primula veris or officinalis, nicknamed the meadow cuckoo, blooms when the eponymous bird makes its first call. In ditches, meadows and undergrowth, it can be recognized in April by its umbels leaning to one side and its bright yellow dress with orange lines in the center. Hairy and fragrant, it is not really spectacular but robust, solid and prolific, it effectively colonizes wild corners. Hybridizing naturally, it is often used by nurserymen in their crossbreeding work.

Primula elatior, the high primrose is rather elegant in April with its bouquets of pale yellow flowers, odorless, united in umbels at the end of a long peduncle. All leaning on the same side, honeyed, they attract butterflies and bees for almost a month. Often confused with Primula veris, it is spotted in damp or even marshy places, at the edge of streams in generally fairly heavy soil. Hybrid easily with others, especially with P. vulgaris, they are a delight for amateurs.

With the dried leaves of P. veris, a lemon zest and a spoon of honey, we can concoct an infusion with a delicate taste which would apparently have calming and sedative properties. François Couplan, a renowned fine cook of wild plants, adds his little yellow flowers to flavor desserts, make mousse or decorate dishes. As for the young leaves, he adds them to soup or salad for their anise flavor. www.couplan.com

From the 19th century, many enthusiasts began to hybridize species P. veris, vulgaris and elatior. Florence Bellis and her Barnhaven nursery in Oregon have become essential. From 1936, she began a real hybridization program by performing manual crosses. She selects more robust and flowering primroses that will go around the world. In particular the “old double-headed” varieties such as rosebuds. Today based in Brittany, the Barnhaven nursery still continues this patient work of selection. www.barnhaven.com

To prevent the early demise of garden primroses, it is necessary to divide the clumps every 3 years before they run out. When? As soon as they take off and are accompanied all around by miniature rosettes. In spring, after flowering, it is enough to separate the rosettes and plant them further away in partial shade in cool, humus-rich and drained soil.

Bear ear. Primula auricula, known as bear’s ear, originally from eastern France and southern Germany, plays in another court. Sophisticated, she is a real competition animal. It exhibits fleshy leaves powdered with white and umbels of originally yellow velvet flowers with a white heart. From the 16th century, it had its heyday in Belgium in the Liège region and was the subject of collections religiously staged in pots protected from the rain inside small mobile theaters. It is undoubtedly for these two-tone powdery primroses with contrasting shades that across the Channel were born the first Flower shows.

Other Asians. Originally from China, the florists’ primroses which brighten up our interiors in winter, are not rustic here. On the other hand, others called candelabra are. Later, these delicate Chinese or Japanese flowers in humid and acidic places from April, May until the heart of summer. With their tangy pastel flowering, they form elegant crowns. But that is another story.