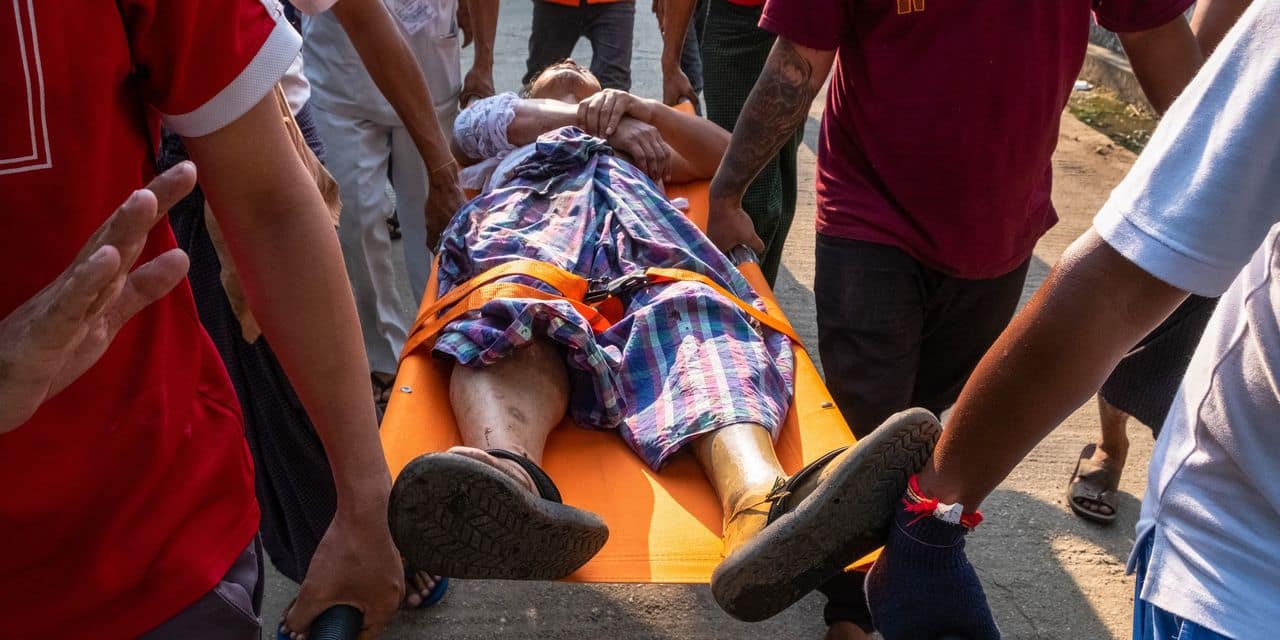 Several hundred police and soldiers are deployed around the compound where railway personnel reside at Ma Hlwa Gone Station, in the east of the economic capital.

“They are blocking the doors (of the apartments) and destroying them to enter,” a family member of a railway worker told AFP, on condition of anonymity for fear of reprisals. “I managed to escape, but I’m worried about the workers” and their relatives who are still stranded.

According to her, some 800 railway workers at this station are involved in the civil disobedience movement.

This movement is disrupting the fragile Burmese economy with empty ministerial offices, closed schools and hospitals, and banks unable to function.

“Complete shutdown of the economy”

The main unions have called for “a complete shutdown of the economy” in an attempt to paralyze the country and increase pressure on the military.

The junta, for its part, ordered officials to return to work from March 8, failing which they would be sacked and face reprisals.

Burma has been in turmoil since the putsch, with daily protests across the country.

A few scattered gatherings were organized on Wednesday.

In Myingyan (center), the demonstration was violently dispersed: three pro-democracy demonstrators were injured, including one seriously in the eye, according to rescuers.

But the strong military presence, especially in the Sanchaung district in Rangoon – the scene on Sunday of a spectacular operation by the security forces with hundreds of protesters surrounded – remained a deterrent and the crowds were fewer.

In another part of the city, security forces burned makeshift barricades, threatening residents to set their apartments on fire, a 26-year-old resident told AFP.

Raids against homes, hospitals, universities, mass arrests, use of lethal force: the junta seems more determined than ever to want to extinguish the largely peaceful wind blowing over the country.

At least 60 civilians have been killed and nearly 2,000 people arrested since February 1, according to the Association for Assistance to Political Prisoners.

The army claims not to be involved in the death of the demonstrators.

It justifies its passage in force by alleviating vast electoral fraud during the legislative elections of November won massively by the party of Aung San Suu Kyi, the National League for Democracy (LND).

In a symbolic gesture, several deputies ousted LND announced on Facebook that they had appointed one of their officials, Mahn Win Khaing Than, vice-president of the country, in charge of replacing the former president of the Republic Win Myint and the former head. of the Aung San Suu Kyi government, still kept in secrecy.

MPs who do not recognize the legitimacy of the coup and have created a committee to represent the civilian government are guilty of “high treason”, a crime punishable by death or 22 years in prison, he warned. a few days ago the junta.

Two LND officials have died in detention in recent days, very shortly after their arrest. Many were arrested, including three last night.

The junta also targets the independent media: three (Myanmar Now, Mizzima and Kamaryut Media) have been targeted by raids by the security forces.

Several media outlets have had their publication licenses revoked and around 20 journalists are in detention, including a photographer from the American news agency Associated Press.

The passage in force of the generals, which put an end to a decade of democratic transition, causes a concert of international protests.

Several Burmese diplomats, including ambassadors to the UN and to the United Kingdom, have even disassociated themselves from the regime.

The French Ambassador to Burma, Christian Lechervy, went to Insein prison in Rangoon on Wednesday, infamous under previous dictatorships and where many people have been detained since February 1.

“France calls for the immediate, safe and unconditional release of all imprisoned political prisoners,” he said on Twitter.

The United States, Britain, and other Western countries have imposed targeted sanctions, but the generals are turning a deaf ear.

China and Russia, traditional allies of the Burmese army, do not officially condemn the coup.